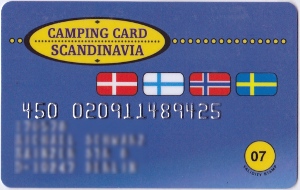 ATTENTION!
The Camping Card Scandinavia (CCS), which was primarily valid for Norway, Sweden, Denmark and Finland, was replaced by the Camping Key Europe in 2012.

This new card is an union of the Camping Card International and the Camping Card Scandinavia. So there is only one card since 2012 for the price of around 16 Euro, which is valid on campsites all over Europe.

According to the Swedish Camping Association, the existing cards will be replaced in course of time by the new camping card.

More information on Camping Key Europe can be found here.

The card was only required on a part of the Norwegian campsites, according to experience about every fourth place.

You could buy a temporary CSS at the first campsite, which demanded the card. The proper plastic card was received later.

Advertising - to deliver relevant advertising, data such as clicks or certain page views are stored in a cookie.

Functional cookies - can not be disabled because they are required for the technical implementation of this page.